Spinal Injections For Lower Back Pain

Fix Your Back From Home

We do see people very regularly here at the clinic who’ve previously had spinal injections, but often the reason why they’ve had them in the first place has often not been communicated effectively to the patient. Injections may be done for a number of reasons, but often they’re given because a patient is in a lot of pain and needs pain relief that’s going to work quickly. We hear all too often from patients that even strong painkillers may not give them relief from the pain they’re in, so it’s all too natural to look at other treatment methods available, which through standard treatment methods in the UK would be injections or surgery.

Why are injections used for back pain?

On the surface level, if someone is really struggling with their back pain, and treatment methods such as physio and painkillers are not working well for the patient, they’ll likely be offered a steroid injection. This is also the case for other areas of the body under duress, often the shoulder or the achilles tendon are two popular places. Despite there being epidural injections and facet joint injections, the actual material being used in the injection is the same – just the area that they’re placed in varies.

A reason injections are used that might not be communicated, might be to diagnose an issue further. If you have a disc bulge and you’re undergoing facet joint injections, do ask the question why because they are separate areas. This is an example of when it’s likely to be a further diagnostic tool, rather than a treatment method. If your symptoms go away for a while, their next step might be to suggest a discectomy so do make sure you understand what the end goal is. Furthermore, do make sure it’s communicated to you what the long-term treatment plan is. Having steroid injections may be enough to help relieve the pain for a couple of weeks, but you need the rehabilitation in order to strengthen those areas if you’re hoping to get long-term relief. For that reason, if you’re mobile and you’re contemplating steroid injections because you don’t want to go through the hassle of rehab, it’s time to change your mindset. The problem isn’t going to go away without strengthening.

What does a steroid injection do?

A steroid injection is essentially anti-inflammatory material that’s deposited into the area you’re experiencing pain. This will help to temporarily reduce inflammation and pain levels, it is not a fix. While this may help on the surface to make you feel back to normal, it’ll also help you to actually physically go back to normal. For you this may mean you’re able to do a lot of things that you’ve been unable to do without being in pain. However, in the same way that painkillers mask the problem, you’re in pain for a reason and if rehabilitation is not done, you’re likely to be doing further damage to the area by simply being able to carry on as normal. 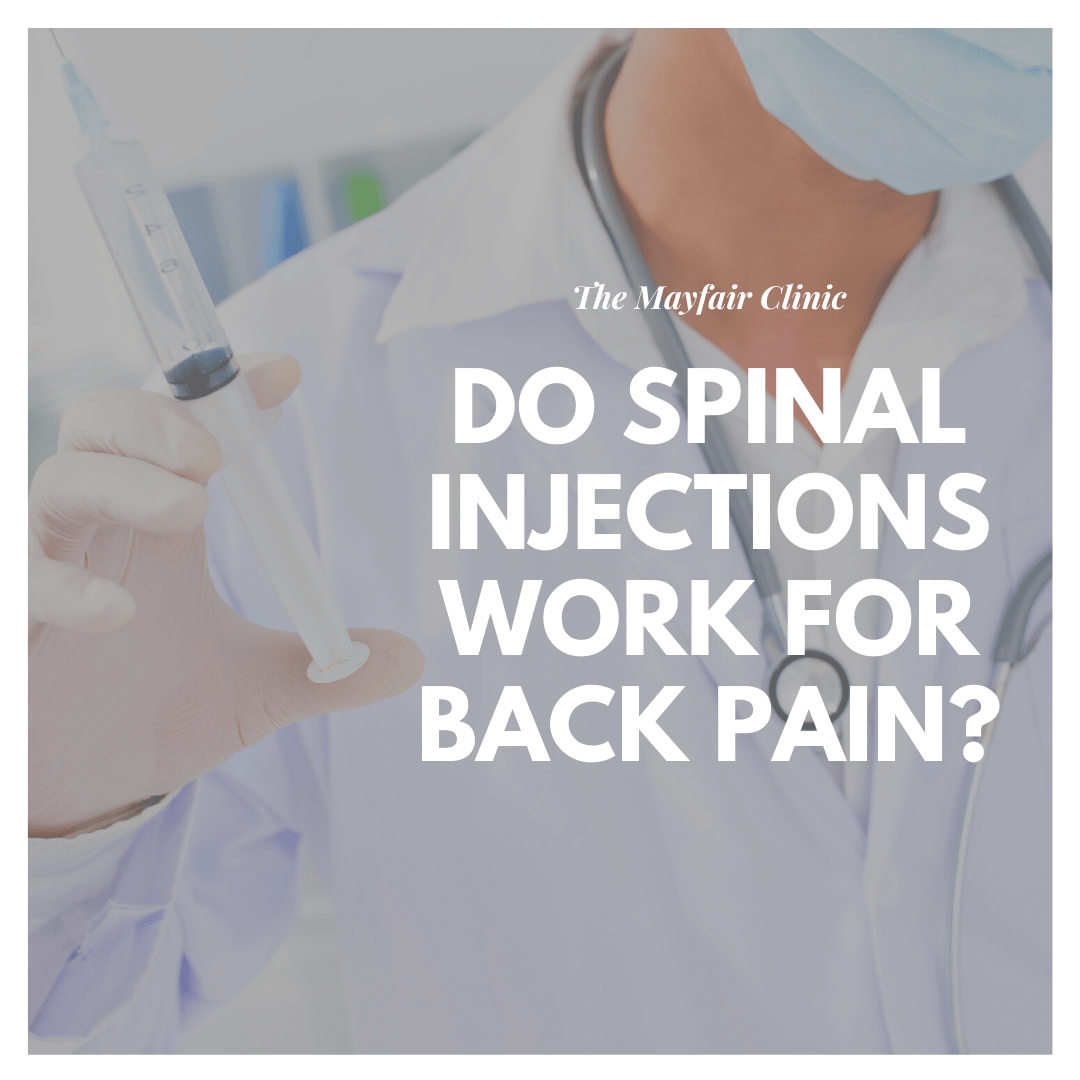 Join The Back In Shape Program

A full protocol to support you get out of back pain in the short term and then rehab safely and effectively to deal with the issue for the long term.

The pain is usually there to protect an injury and prevent further damage, but when that has been taken away you may be quite likely to do further damage. In one study, a huge 25% of cases of steroid injections were injected in an incorrect place. An easy way to make sure this doesn’t happen to you is to have steroid injections under image guidance, so the practitioner can ensure this is done. But there are some circumstances where this might not happen, for example in an epidural during childbirth.

What Other Treatment Options Exist?

We’ve seen a gradual shift in private clinics from practitioners moving away from steroid injections, as there isn’t really the evidence to suggest that an injection is at all helpful for back pain. The shift towards regenerative therapies, such as platelet rich plasma therapy (PRP) and stem cell therapy have shown much more promising results for any injury in the body. Financially speaking, these regenerative treatments are much more costly than injections but sadly there might not be the desire to fulfil these kinds of more effective therapies because steroid injections can be mass produced easily, which is not the case in PRP or stem cell therapy.

We hope you found today’s article helpful! If you did have any questions about steroid injections, please do get in touch with us and we’d be happy to answer those for you. You can reach us either on our social channels, by emailing us at info@themayfairclinic.com or by tuning in to our daily livestreams on our Facebook and YouTube channel every weekday. Equally, if you’ve had injections in the past, do get in touch and let us know your experience! For back pain we do have a membership area you can join for free, so if you would like an informed rehabilitation approach, please visit www.backinshapeapp.com to start today!